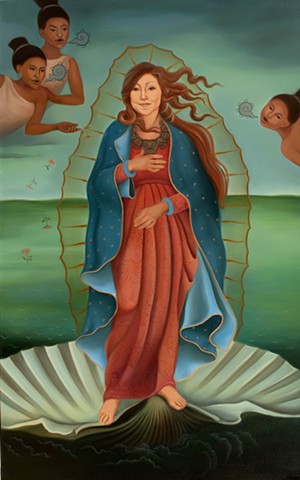 This body of work represents my interest in the concept of nepantla. Chicana author Gloria Anzaldua describes nepantla as "an in-between state, that uncertain terrain one crosses when moving from one place to another, when changing from one class, race or gender position to another, when traveling from the present identity into a new identity." Anzaldua's description of nepantla describes my experience of what it means to be Chicana. Growing up on the borderlands, the border between Mexico and the United States provided me with the unique perspective of living in two worlds.

I have lived in nepantla all my life but didn't become aware of this concept until I was a graduate student. As I struggled to understand the construction of my Chicana identity I discovered that the process of nepantla had occurred in 16th century Mesoamerica when indigenous spiritual beliefs fused with Catholic practices. The result was a new mixed religion often referred to as Mexican Catholicism. The duality of this mixed religion is much like the two worldviews embodied by Chicanas/os today. My interest in Mexican Catholicism as a visual concept and not as a practicing Catholic has resulted in many visual references to Mexican Catholicism in my work.

Visually I represent nepantla and Mexican Catholicism by merging multiple elements into a single image. For example in the painting titled "Religious Syncretism: Coatlicue, Guadalupe and Angela" I have merged the image of my daughter Angela with the image of Coatlicue and Guadalupe. This painting is composed of multiple canvases that when placed side by side complete the painting, thus echoing my fragmented yet whole identity.