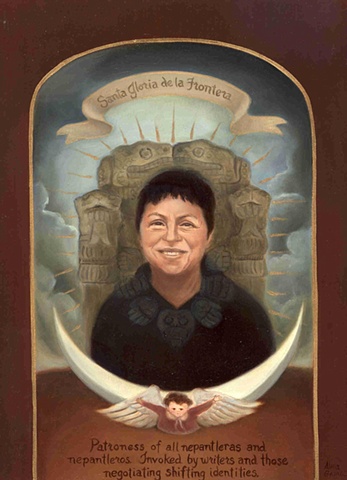 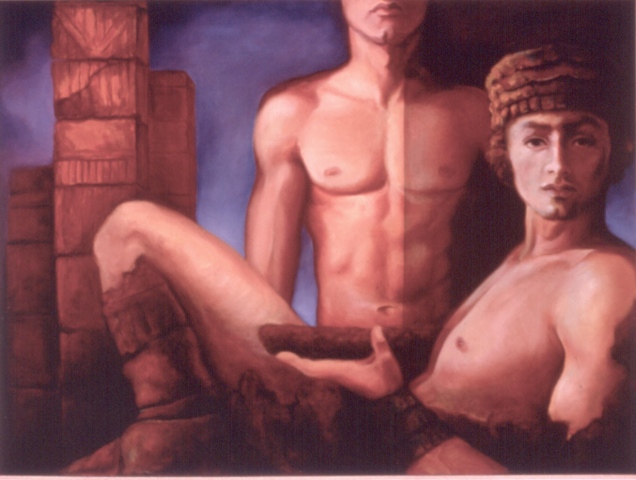 "Nepantla" is a Nahuatl word and Gloria Anzaldua best describes this word as "an in-between state, that uncertain terrain one crosses when moving from one place to another, when changing from one class, race or gender position to another, when traveling from the present identity into a new identity."

Living in "nepantla" is a common point of departure for my work and for the work of other Chicano artists and writers. For Chicanos, living in nepantla is the norm. Finding ourselves in that space serves as a reminder that our identities are shaped by two or more elements, which ultimately creates a hybrid. In Chicano studies this hybrid identity is often referred to as a new mestizo consciousness.

As a Chicana and visual artist, I am keenly aware of my tri-cultural heritage. I am neither fully Mexican, nor American, and yet I am both because throughout my life I have fully engaged in both cultures and spoken two languages. The straddling of two cultures has created a new consciousness, that of a Chicano identity.

In this series I am looking at parallels between Mesoamerican religious hybridism and a Chicana/o identity. In my search to further explore and understand the construction of my Chicana identity I discovered similar processes had occurred in the 16th century when Mesoamerican spiritual beliefs fused with Catholic practices. The result was a hybrid religion. The formation of a new religion for the indigenous peoples of Mesoamerica was the result of occupying the space of "nepantla", of being in the middle of two opposing religious views. The duality of this hybrid religion is much like the two worldviews embodied by Chicanos.

The indigenous people's successul fusion of various Catholic elements with their religious beliefs is similar to the ways Chicanos must adopt and blend their Mexican and American heritages in order to maintain an ethnic identity.